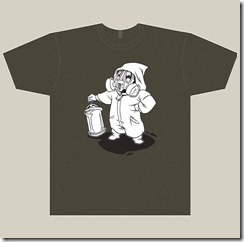 One of my favourite artists on DeviantArt, Dillerkind, has started selling shirts and prints on RedBubble.

Check out his stuff if you want something unique and fun.

Posted by microUgly at 8:48 AM No comments:

WhatTheFont is a web-based tool for identifying a font in an image.  It’s not a new service and I’ve known about it for a long time, but I don’t think I’ve ever blogged about it and yesterday it was a lifesaver for me.

I had some printed material that I need to create a new document to compliment.  Because it was printed and not particularly large, the scan quality was pretty poor.  And the font had no spaces between the characters, which WhatTheFont cannot handle.  Despite this, WhatTheFont detected the font correctly based on two uppercase characters in my sample.  Amazing!  And the font was very obscure, so I would never have found it otherwise.

As a side note, I believe that a trick you can use to help WhatTheFont identify a font that has no spaces between characters, is to edit the image and put in the spaces between each character yourself.

Posted by microUgly at 9:19 AM No comments: