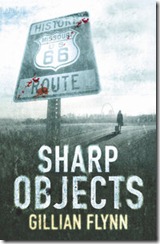 I don’t read many books, so you won’t see me recommend much.  But I picked up Sharp Objects by Gillian Flynn because it’s cover looked good and had a sticker boasting awards it won (how else do you choose?).

I loved it.  It was disturbing and kinda messed-up—the kind of story that makes you wonder about the author (who’s pretty cute, by the way).

I immediately read Dark Places after that, which is also a great story—more violent but less sexual with an ending that it is neither obvious nor ridiculously obscure.

Read Gillian Flynn’s For Readers page to get an idea of if you would be interested in this author:

I wrote a dark, dark book. A book with a narrator who drinks too much, screws too much, and has a long history of slicing words into herself. With a mother who’s the definition of toxic, and a thirteen-year-old half-sister with a finely honed bartering system for drugs, sex, control. In a small, disturbed town, in which two little girls are murdered. It’s not a particularly flattering portrait of women, which is fine by me.

Posted by microUgly at 8:40 PM

Email ThisBlogThis!Share to TwitterShare to FacebookShare to Pinterest
Labels: books