Windows Live Writer – how do you do? 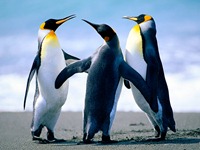 I’ve quickly jumped onto using the release candidate of Windows 7 as my primary desktop operating system.  One of the first things I noticed is that unlike Windows Vista, it’s not bundled with Windows Photo Gallery and other tools.  So when getting Windows Live Photo Gallery from Window Live I noticed Windows Live Writer for posting on blogs.

So that’s what I’m doing, posting this blog from Windows Live Writer.  I have to admit, it’s pretty nice.  The editor gives me pretty much exactly what a I need.

I’ve found the web-based Blogspot editor to be limited and awkward—I tend to find myself writing the raw HTML instead of using the WYSIWYG editor.  But Live Writer (do we really need to prefix every Live product with “Windows Live”?) gives me a nice GUI with access to useful properties, such as Title and Rel attributes on links.

I was about to say that as a HTML purist, Live Writer was beginning to turn me on, as it correctly used <p> to create paragraph breaks, instead of <br><br> and even used <p> tags correctly with <blockquote>.  But then I seen it uses <font> tags to change a font-face and <u> for underlines—so they’ve really dropped the ball there.  Is it that hard to make it use <span> tags with inline styles?

Despite using deprecated HTML, I’ll probably still use Live Writer because it’s so easy and works so well.

I like it too. I just wish it could do a little more... like be able to set default margins around your photos instead of having to remember to select them.

I also wish there was some way to turn the html "down a bit". I'm trying to get a specific extended BBCode tag to work in my LW posts, but it keeps either wrapping them in "P" tags or ignoring the fact that I was a line break above it. (I'm still learning it so maybe there's some way to do it - I'm still experimenting!)