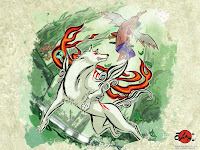 I was one of the people who were really excited when a port of the PS2 game, Okami, was announced for Wii.  I suspect I was also one of the many people who didn't buy the game when it came out despite my excitement.

A few weeks ago I placed an order for Okami on CDWOW.  A few weeks later and CDWOW is still trying to source a copy of the game.  I've done a search on a collection of other sites and found that nobody else, at least in Australia, are selling the game.

It seems the game didn't last 12 months before they stopped producing PAL copies of it.  I find this quite concerning that a console that is so young, so extremely popular, and yet can't sustain sales of such a highly rated product.  I think this is something Nintendo needs to turn around--in the long run they'll suffer if the Wii becomes synonymous with shitty party games.

I'm truly hoping that MadWorld will be on store shelves for longer than 12 months when it's released.

Posted by microUgly at 2:35 PM